Thoughts on the 12" MacBook

I haven’t been able to trust my 15” MacBook to do anything of import in nearly three weeks. I have been contacted by someone in an Apple call center (not because of my Genius Bar appointment, not because of my very honest survey after that appointment, but because of a Tweet mentioning Tim Cook). As is the way with such things the initial call occurred while I was in Portland and well over a thousand miles away from the laptop, which meant I couldn’t really do anything the nice call center person wanted me to do. While I’m not at all convinced this is going to result in warm fuzzies on my end, I sent off my software diagnostics and am awaiting their response.

Luckily(?), 2015 has been a heavy travel year for Justin and me and, much as I adore my daily driver, it’s a lot to lug around on trips when I don’t need more power. When Apple announced the 12” MacBook, we debated for a few weeks before deciding to get it as an auxiliary computer for use when we travel and for light computing tasks like writing and browsing the Internet.

As you may have guessed, this is the laptop I’ve been using for the last several weeks. You may have also guessed that I have Thoughts.

I really adore this computer for a lot of reasons. The keyboard seems to be a love it or hate it kind of thing; I really like it and I’m pretty quick on it now that I’m accustomed to the lower profile and travel distance of the keys. It’s a little thing, but I also enjoy how little light leakage there is from the backlit keyboard now that each key has its own teeny LED. The retina screen is beautiful, naturally, and the trackpad is kind of trippy.1

It’s fantastic for the things we purchased it to do: single tasks like writing, surfing the web, and light image editing. It’s even worked really well for recording podcasts.

For my day-to-day, however, it’s lacking. Prepping for the 1Password 5.5 for iOS release was painful. There’s not enough screen real estate to have my typical 5-10 windows2 open and functional. I resorted to purchasing Duet so I could use my iPad mini as a second display. This actually worked well, but the MacBook’s battery life was significantly reduced and it requires a table to really be efficient. 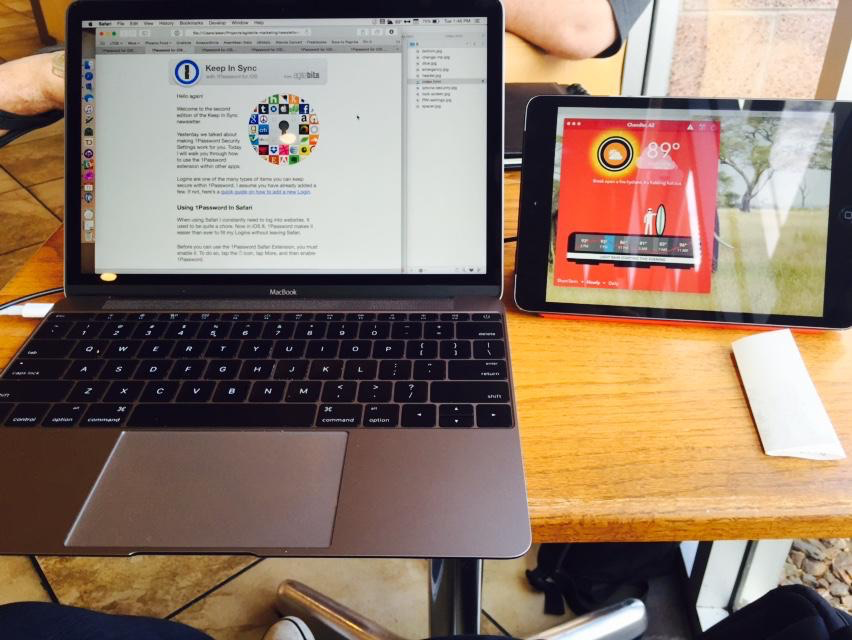 Performance is pretty slow. Xcode does run and it’s not too terrible, but it’s definitely not optimal. If I try to run Xcode plus other apps it gets laggy and multitasking becomes problematic. The lag plus the inadequate screen space means that I spend a lot of time mildly frustrated with the task I’m trying to accomplish and annoyed with the computer.

I was planning on upgrading my 15” MacBook this fall after the rumored refresh, but I’m not sure how much longer I can hold out with the current setup. If Apple decides not to replace my MacBook Pro, I might have to buy a new computer several months earlier than I anticipated and borrow money from funds dedicated to other things, like medical emergencies.

tl;dr: Baby MacBook is a fantastic computer for light tasks, but not good for anything more intense. Aleen is sad and wants her 15” MacBook Pro back, but is grateful that she has the Baby MacBook.