Less Than Or Equal on Relay

You may have heard that my little podcast, Less Than Or Equal, has joined the geeky podcasting network Relay. The move has been in the works for months and I’m so thrilled to finally let everyone know!

Less Than Or Equal’s move has brought some new listeners into the fold. We’ve been at this for over a year and have produced nearly 70 episodes; that can be a daunting back catalog to make it through! You’re welcome to meander your way through the archive, but if you’d like a curated list of shows to listen to, here’s what my Twitter followers recommend:1

I’ll edit and add more episodes if they come in, but this should keep everyone busy for a little while!

Before I wrap it up: this show would be nothing if it weren’t for the support of its listeners. Thanks to everyone who’s been taking this journey with Justin and me. You’ve all been phenomenal and I’m excited to see where the road leads us all.

I didn’t read comics when I was growing up, both because I lacked access to them and because they didn’t really seem like they were for me. To put it plainly, I thought comic books were for boys who were far geekier than even I was (and I watched Star Trek).

Getting into these universes as an adult has been daunting because of their long and storied histories. Do you like the idea of Spider-Man? Cool. Which Spider-Man: Peter Parker, Miles Morales, Migual O’Hara, May Parker? Should you start with the current story arc or go back to the very beginning? What references to past events are going to go over your head? Who do you go to for advice, especially if you’re a woman who’s ogled and dismissed in many comic book shops?

I just wasn’t interested in dealing with any of it. I’ve read some comics over the years (like Batwoman: Elegy, Atomic Robo, and The Walking Dead), but never dived any deeper than that.

The Marvel Cinematic Universe has done wonders for piquing my interest in these worlds, but it’s oftentimes dark and inappropriate for children. That’s part of why I was so excited to see the Supergirl trailer. Even a glance told me that it was going to be different. The sets were lighter and cleaner. The music was uplifting. There was even a joke or two. A potentially kid-appropriate superhero show featuring a woman? It sounded amazing to me.

The pilot was okay. It didn’t feel groundbreaking or great, but I was happy to hang in there and see where things ended up going. By the end of the second episode, however, I was rolling my eyes and sighing heavily.

The entire episode featured our hero, Kara Zor-El, being told that she couldn’t, that she wasn’t ready, that she shouldn’t. Instead of being empowered, Kara was questioned and continually held back. “You’re not ready for that” and “we don’t know if you’re strong enough” were common sentiments throughout the episode.

In one scene, Kara’s adopted sister could have easily said, “Hey. I know you’re really strong, but why don’t I show you how to fight well just in case you lose your super strength.” Instead, Alex took Kara into a kryptonite-laced room, without warning, so that Kara was weakened. She was literally disempowered.

Interestingly, every women I’ve talked to about the show thus far have been disappointed, some going so far as to say they won’t continue to watch.1 I think this because women are intimately familiar with the sentiment of the show thus far. Do we really want to watch another woman struggle to be seen, or would we rather immerse ourselves in a world where Supergirl is encouraged and assumed capable from the onset? Do we want our girls watching another show where a potential role model has to fight for acceptance?

I’m afraid that, if this continues, Supergirl won’t be a successful show and entertainment executives will point to it as evidence that female superheroes don’t sell. This is the last thing I want to happen. I need more Wonder Woman in my life!

I’m really interested in the Light L16 camera, though it’s not something I’ll conceivably have the money to purchase for years to come. I was clicking through their website today and noticed their about page has zero women. Not a single executive, advisor, or investor is female; I’m incensed. Women are not unicorns, much as many of us might wish it.

I briefly considered not buying tech unless the company had some women in the upper echelons, but then I realized that I’d be waiting a long time to make any purchases.

My great aunt, Yvonne, died1 last night. She was 94, sick, and enrolled in hospice, so it wasn’t unexpected. Still, I’ve spent the day thinking about her.

What’s surprised me the most is that I don’t really have many specific memories of Aunt Yvonne. She was a fixture of my childhood until I was eight or so; I didn’t see her a whole lot after that.

I remember the trailer she had in a retirement community. It was a bright golden yellow and easy to spot from the road. She had a chihuahua that terrified me because I was always warned that the dog disliked kids and might bite me. One day, I spent a few hours with her and watched as a painter coated the walls of her home in a fresh coat of snowy white.

Mostly, I remember how she was kind in a world that is so frequently cruel. At the end of the day, there’s little else that matters.

Why I Bought a Ginormous iPhone

I was laying in bed one night a few months ago when it hit me. My next iPhone was probably going to be the 6 Plus sized device.

Now, when I say, “It hit me,” I mean it literally. I was reading on my iPhone 6, tried to turn the page, and dropped all 4.55 ounces of glass and aluminum on my face. This had happened numerous times in the eight months I owned the phone, but for whatever reason that incident was my turning point.

It seems fitting that books were the catalyst for my decision. I’ve always been a voracious reader; however, my time to do so is limited nowadays so my time immersed in other worlds is precious. I love my Kindle Voyage for novel consumption, while Justin prefers iBooks. Books we’re both interested in are obtained in Apple’s ecosystem and must be read on OS X or iOS, so I do a fair amount of my reading on my iPad or iPhone.

When I’ve used the iPad mini 2 as a bedtime reading device, it’s been frustrating. It’s just a bit too big for me to palm comfortably and grasping it on the side or corner results in a slightly wobbly tablet and bad reading experience. While I can hold iPhone 6 in one hand, it’s nearly impossible for me to reach across the screen with my thumb to turn the page, which means that both hands have to be free to do much of anything.1 Furthermore, the number of times I’ve dropped the phone on my face proves that I really needed to use my other hand to steady the device anyway.

It took a few days before I voiced the thought out loud, during which time I really examined the way I used the iPhone 6. As it turns out, I almost never used it one-handed. Instead, I used my four left fingers as a platform on which to rest the phone and would scroll, swipe, or tap with my right index finger. That’s also how I did the majority of my typing, with the occasional assist from my left thumb.

Pockets were also not much of a consideration. When the bigger phones were announced last fall, I was concerned that the iPhone 6 would be too big to fit comfortably in my front jeans pocket, where my cell phones have lived since the early 2000s. As it turns out, I was right. It didn’t take long before I mostly abandoned my front pocket and started carrying my phone either in my hand or back pocket, removing it when I sat down. My phone only goes in a bag when I’m making my way through airport security.

The final thing to think about was work. I’m a writer embedded in an iOS development team, and I found myself wanting an iPhone 6 Plus numerous times in the process of testing and documenting new features. I was hoping that I’d be able to hold off on getting a new phone for another year but 3D Touch seemed like a game-changer to me, especially considering some ideas I have. Sure, I can use Simulator to test using a variety of iOS device sizes, but nothing beats using new features on the phone itself. I’m a much better technical writer when I interact with apps as they’re meant to be used.

There were other more minor considerations, too. The camera is slightly better than the one on my iPhone 6 and it has image stabilization. My hope was that the larger phone would result in more accurate, less frustrating typing. Battery life on the bigger phone is considerably better, and I often found myself plugging in the iPhone 6 to make it through the day. Having a faster phone with more RAM was icing on the cake (or in the macaron, maybe?). 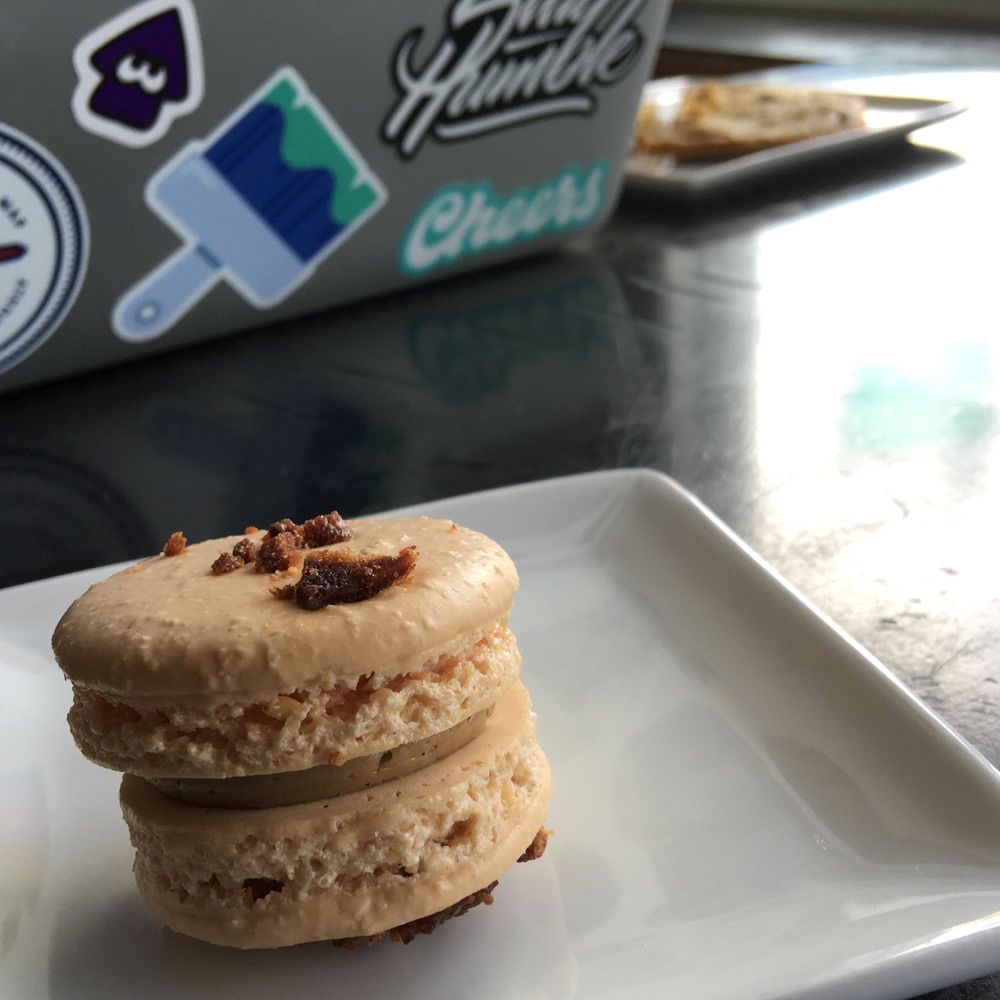 It hasn’t quite been four days since I got the iPhone 6S Plus and I’m pleased so far. In fact, I was delighted from the moment I unboxed it, once I got past its much more considerable heft. Touch ID is nearly instantaneous and now that I can use 3D Touch to move the text cursor and select blocks of text, I’m in love. I thought that I’d have an occasional twinge of doubt about the larger form factor, but so far I’m all-in with no regrets.

And, for the first time ever, I have composed an entire blog post on a touch-screen device. Prior to the iPhone 6S Plus, I didn’t think that was something I’d ever do.